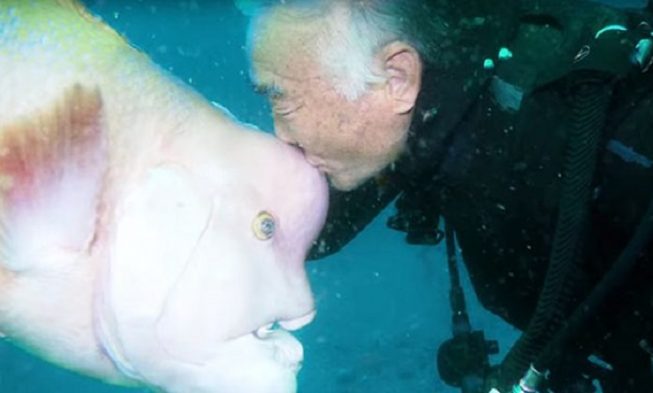 The Japanese diver, Hiroyuki Arakawa has a friend that belongs to the other living environment, in the water. He has been visiting his best friend Fish for 25 years now. This friendship with an animal is for real and you can see it in the video, here:

Hiroyuki Arakawa has been responsible for visiting one of the Shinto religion’s shrines called torii, which is located on a specific place, beneath the surface of Japan’s Tateyama Bay. His regular visits to the shrine over the decades, allowed him to know marine creatures and sea fishes who live around it. But, here is the most important thing of this story, he became a real friend with the Asian sheepshead wrasse named Yoriko. Their beautiful relationship was captured on a viral video, in which you can see Arakawa’s custom of greeting the big with a kiss.

According to a recent scientific study that fish can recognize human faces.  Dr. Cait Newport from Oxford University told CNN:

“Scientists presented the fish with two images of human faces and trained them to choose one by spitting their jets at that picture.”

The researchers, investigating the ability of this fish of recognizing the faces tried to put it in a little harder condition. They were taking the pictures and making them black and white and evening out the head shapes in order to confuse the fish. Instead of throwing the fish for a loop, it was able to pick the familiar face even then, with the accuracy of 86%!

This animal’s friendship with the diver is even more inspiring and legit by taking into account this new evidence.