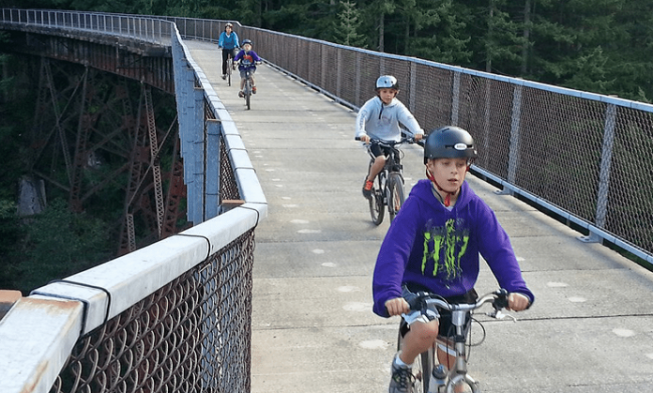 For those who are ready for new challenges here is a very interesting one, biking across the U.S on a new, 4,000-mile path. This trail will let bikers to ride from coast to coast on a seamless trail.

Bikers will pedal across the entire country on a safe and scenic pathway, having a possibility for exploring America’s heritage, its beauty, its potential, and bounty. They may use the classical way to traverse the United States, but professionals and biking enthusiasts will for sure choose the cross-country trip on their bike once it is completed.

The Rails-to-Trails Conservancy (RTC) has announced a cross-country, multi-use trail called the Great American Rail-Trail, which connects more than 3,700 miles of repurposed train routes and multi-use trails. It is interesting to notice that all routes are separate from vehicle traffic. This trail goes across 12 states from Washington, D.C., to Washington State.

The trail goes across Maryland, Pennsylvania, West Virginia, Ohio, Indiana, Illinois, Iowa, Nebraska, Wyoming, Montana, Idaho, and Washington, and the District of Columbia. It will connect several existing biking trails, including the Capital Crescent Trail, the Hennepin Canal Parkway, the Casper Rail Trail, and Palouse to Cascades State Park Trail. These connection are important because they are allowing bikers to hop on the trail from wherever.

The RTC President, Ryan Chao said: “The Great American Rail-Trail will be a national treasure. It presents a once-in-a-lifetime opportunity to create—together—an enduring gift to the nation that will bring joy for generations to come.”

It is expected that the trail will directly serve nearly 50 million people within 50 miles of the route. The trail will be easily accessed by many Americans.

Analyzes for this trail were organized by RTC, which spent more than 18 months. They analyzed current biking trails, collaborating with state agencies and local trail partners, and created the plan. According to analyzes, over 34,000 miles of nationwide trails would be the most suitable.

The planned route will keep bikers separate from vehicle traffic. While the full route for the trail won’t be released until spring 2019, the 12 gateway trails have been revealed that will make the whole project possible.

According to the former RTC president, Keith Laughlin, at the RTC, were aware of the potential of a coast-to-coast rail-trail for decades, but they wanted to be certain it was viable before they committed to bringing this vision to life.

Now they announced: “RTC is ready to lead the effort to connect the trail across communities, counties and state lines to create seamless off-road biking and walking journey for the country.”

At the moment the Great American Rail-Trail is only 52% done and it will take years to complete. The route should connect over 125 existing trails with another 90 “trail gaps.”

However, already completed segments of the Great American Rail-Trail will be opened to the public, making it easier to travel throughout the country on bikes in the meantime.

A passion for biking

Biking is not popular in the USA, so the Great American Rail-Trail isn’t the first attempt at creating an alternative cross-country route for cyclists. Many other countries have also created similar pathways for bikers and hikers. We can mention here The Route of the Parks of Patagonia in Chile [4], The Grand Sentier de la Côte Bleue in Southern France,  and the world’s longest multi-use trail network, The Great Trail, spanning 15,000 miles in Canada.

According to Kevin Mills, RTC’s senior vice president of policy: “The scale and scope of this project are unprecedented. That’s what makes this exciting and scary.”

The main idea behind this project is to alleviate the stress of cyclists caused by cars on the road with cars when it is shared with them. There will also be the accessibility to pedestrians and joggers who will also benefit enormously from the project.