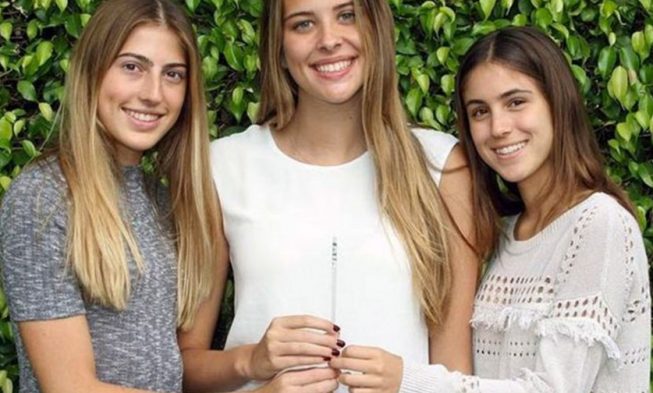 Three teenage girls, who invented a straw as their weapon, also became involved in the fight against the rape drug. The use of this type of drug is a significant problem, especially for female students, but a simple straw can help them prevent crime.

To come up with such a concept, they were helped by a lecture on entrepreneurship they attended. They decided to participate with their product at the 2017 Miami Herald’s Business Plan Challenge and there they won first place

Susana Cappello and Carolina Baigorri, both 17, and Victoria Roca, 18, are students of Miami, Florida’s Gulliver Preparatory School. They designed “Smart Straws” including two separate drug test strips. When straws are put into drinks, the straps turn light blue if they detect some substances that are often used for sexual abuse.

The quality of the smart straw is such that it can identify the most popular forms of drugs used for rape, including roofies (Rohypnol), Ketamine (Special K), and gamma-hydroxy-butyric acid (GHB).

“We know it’s not a solution because it can’t end rape, but we were hoping to lower the amount of rape and dangerous situations you might be in through drugs.”

According to the 2016 study by the Bureau of Justice Statistics, date rapes are among the higher number of rape cases.

For instance, 21% of female college students across nine schools experienced sexual assault, with most incidents involving the consumption of drugs and alcohol. The target groups for that kind of assault are women ages 16 to 24. So as Baigorri stated it is difficult to be young women in such circumstances, even her generation is well informed about this problem.

Smart Straws are a great invention, but there are some other recommendations that should be followed, such as:

The intention of the team, as Cappello explained, is to continue to brainstorm different ways of making the straw even better. So, their idea is to include eco-friendly and produced various sizes of straws to accommodate different types of drinks.

They are planning to patent Smart Straws and speaking with large manufacturers, so their straws will be available for others in the market. The straws will be affordable and cheap enough to dispose of. Also in their plan is to launch a Kickstarter campaign ahead of the official release of the Smart Straws.

Roca said that they are determined to make their business idea a success, and not only for them, but they want to inspire others to follow their dreams, especially those who have a business idea to pursue it.

The trio released a survey at Northwestern University, finding that 85% of participants said they would use the straw.