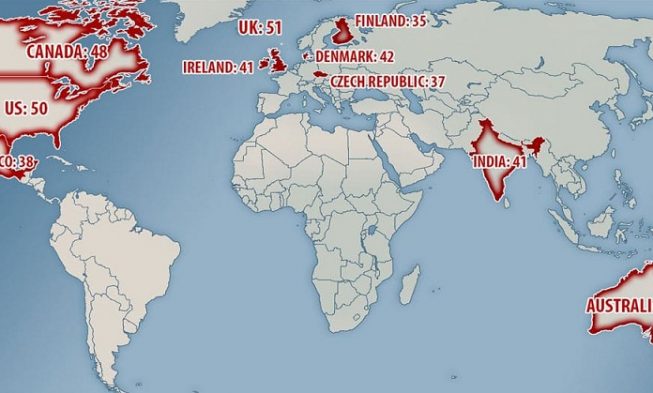 According to the rankings, the adults in the UK get drunk more often than anywhere else in the world, they, actually are getting intoxicated an average of 51.1 times in a 12-month period, which is almost once a week.

According to an analysis of data from people living in 36 countries, the global average is 33, but the English-speaking countries led the way for how often people get drunk. This is confirmed by the findings from the eighth annual Global Drugs Survey, which are the largest poll on substance use in the world.

LOOK AT THE LIST OF HOW OFTEN PEOPLE GET DRUNK A YEAR ON AVERAGE IN SOME COUNTRIES:

Majority of experts believe that this is being driven by young people (the ‘millennial’ generation) as they tend to be far more restrained in their drinking habits than elderly.

The study was conducted in different countries and there were surveyed 5,400 people from England, Wales, Scotland, and Northern Ireland and more than 120,000 globally.

According to the founder of the Global Drugs Survey Professor Adam Winstock, they got too much bad information, and that ”… current guidelines fail to accept the pleasure of intoxication and give a little guide on the difference between being a little drunk and a lot drunk, and doing it three-four times a year versus weekly.”

He added that people in the UK don’t tend to do moderation, but they end up getting drunk as the point of the evening. He also states that getting drunk carries risks of injury and health harm, but here is very important to start highlighting the risks at different levels of drinking even if they are above safe limits.

Comparing to men the women consistently reported feeling post-drinking regret, while German women over the age of 25 were most likely to be concerned about their sessions.

Here are some findings of the women and alcohol:

According to the researcher Alexandra Aldridge, people can feel reluctant to use the words sexual assault because they may believe their experience is less valid if they are intoxicated.

Additionally, she said: ‘Clearly people are feeling responsible in some way for their actions, and I think a lot of people who experience harassment or being taken advantage of can really relate to that.’

The World Health Organization and the ONS in their reports have consistently shown that drinking in the UK has been falling for more than a decade and that Brits are actually drinking less than many of their European neighbors.

The evidence in the last period shows that the way people drink in the UK is changing and people are increasingly choosing fewer, better quality drinks, which is a positive move in the right direction.

FACTS ABOUT TEENS DRINKING IN THE UK

–           The largest decline in prevalence for both girls and boys was in England, where beer and spirit consumption has also fallen significantly.

Dr. Jo Inchley, the lead editor of the report, said that the overall reductions in harmful drinking have been greatest in countries that traditionally have had a higher prevalence (Great Britain and the Nordic region).

Jo added: “This makes it clear that change is possible; however, more should be done to ensure that adolescents are effectively protected from the harms caused by alcohol.”

The largest decreases in beer consumption were observed among 15-year-old boys in Wales, England, and Denmark, while the largest decline in spirit drinking was among teenagers in England, Denmark, and Scotland.