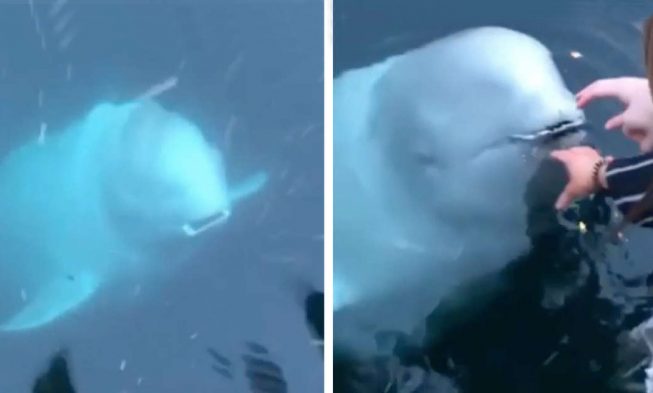 Fishermen run into number of whales, and it’s definitely not something they find surprising. However, a beluga whale succeeded to surprise a group of Norwegian fishermen.

The event made headlines all over the world. This completely friendly whale approached them, and the fishermen noticed that it was wearing a harness. What was odd about it, was that when they removed the harness it said “Equipment St. Petersburg” on it.

After a short time, experts confirmed that Norway, Denmark or Greenland don’t stand behind these harnesses. It turned out that it probably belonged to the Russian. Judging by the behavior of the mammal, they believe that the Russian trained it for the navy spying purposes.

This kind beluga whale tried to surprise the visitors of Hammerfest, Norway. It’s a place located near ocean waters. It was Ina Mansika who got lucky enough to be honored by this whale’s pleasant gesture.

As this woman was spying on the whale which has been thought to be hanging out in the area, something strange happened. The woman was lying down on the dock, looking for the whale, when suddenly her phone fell in the ocean.

She forgot to close her jacket, so her phone slipped through it, and went straight into the ocean. The woman was totally hopeless, thinking that she would never get a chance to recover her phone. And then something amazing happened. She noticed that the whale was swimming towards her, with the dropped phone in its mouth.

Luckily, there’s a video featuring this moment and it’s been going viral on the Internet these days. Even though the phone of this woman was in a really bad condition, it was totally worth it. This woman has got something amazing to share with her loved ones. It’s a moment that she’ll remember forever.