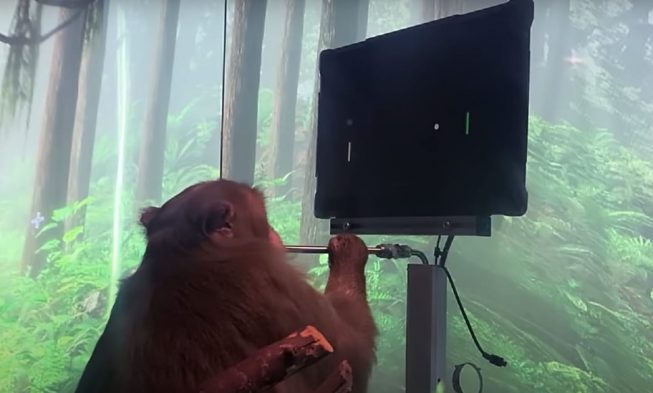 Elon Musk’s brain-machine interface business, Neuralink, has uploaded a video to YouTube that appears to show a monkey manipulating an on-screen cursor using only its mind.

According to the video’s unidentified narrator, Pager, a 9-year-old macaque monkey, had a Neuralink implanted about six weeks before the video was taken.

For a banana smoothie served through a metal straw, he was first taught to play video games using a joystick. The Neuralink system stored information about which neurons were firing while he was doing this, allowing him to learn to predict hand movements by tracking which regions fired.

Pager, a male macaque with chips implanted on either side of his brain, plays Mind Pong in this three-minute video by Neuralink. He was taught to use a joystick, but it is now unplugged. He seems to be able to manipulate the paddle by actually thinking about moving his hand up and down.

According to the video’s voiceover, Neuralink operates by capturing and interpreting electrical signals from the brain using over 2,000 electrodes implanted in regions of the monkey’s motor cortex that coordinate hand and arm movements.

You can see the video below:

The publication of this video coincides with some troubling news stories about the treatment of animals at some product testing facilities, and it will certainly spark debate about the ethics of monkey experiments. Neuralink has previously implanted rodents and pigs’ brains, but Musk maintains that the animals are handled as humanely as possible.

Neuralink clarified in a blog post that the implant would eventually be used on humans.

While the technology is still in its early stages, Neuralink, a San Francisco-based company co-founded by Musk in 2016, aims to implant wireless brain computer chips to help treat neurological disorders such as dementia, Alzheimer’s, and spinal cord injuries, as well as merge humanity with artificial intelligence.

Through companies including Tesla Inc. and SpaceX, Musk has a history of bringing together diverse experts to create technology that was historically limited to academic laboratories, including rockets and electric vehicles.