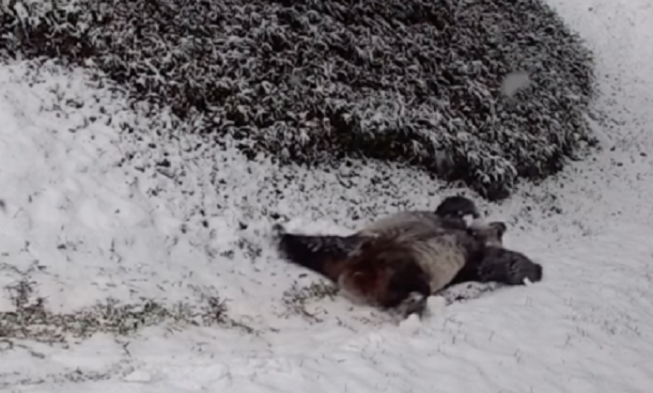 There’s this video that has been going viral on the Internet these days. It’s about two giant pandas who seem to be enjoying their time on the snow.

People at the Smithsonian’s National Zoo call them Mei Xiang and Tian Tian. The two of them are definitely chilling and enjoying on the snow. It looks like they are taking full advantage of the weekend’s snowfall.

The fun time came on January 31, after the winter weather moved to the city. It brought joy to both of them and they had a blast “sledding” down a snowy hill.

Anyway, giant pandas originally come from a mountainous region of central China. And since the mountains and high-altitude forests used to be their natural habitat, they know how to behave on a snowy day.

The 51-second video captures Mei Xiang and Tian Tian rolling around in the snow. The Smithsonian Magazine reported that there were 2.5 inches of snowfall on Sunday evening, which meant one thing for the giant pandas – time for playing outside on the snow.

People’s reactions on the video

Over the last couple of days, the video footage got so popular on Tweeter, that it reached up to 7 million views, 116,000 likes and 79,000 shares. When reading the comments, it could be noticed that people felt like the happiness of the pandas was infectious.

Some of the people wrote that they correlate with the pandas’ behavior, since they share the same feelings about snow. Another one said that the happiness of a panda brings joy, pointing out that they are like humans, it’s just that pandas do not do anything to destroy our planet.

One of the people who commented on the video focused on the place they naturally belong to. He said that he loves the fact that they are having fun over there, but they should not be kept in the zoo permanently.

Nevertheless, pandas were not the only animals who enjoyed their time playing outside on the snow. There were some horses and baby elephants across some of the other zoos, who were being playful as well.

Enjoy in the snowy day!