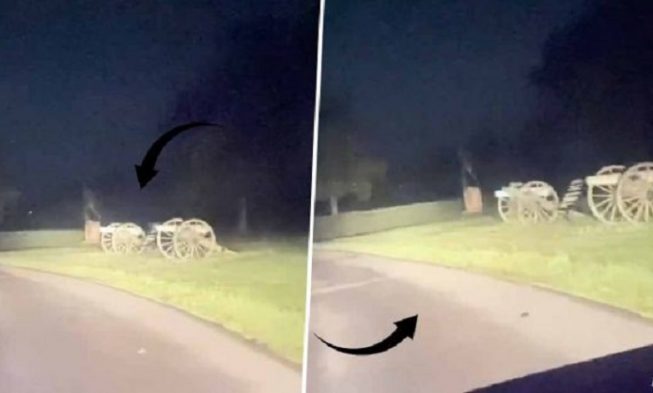 The Battle of Gettysburg site is one of the “ghostliest” places in America. Today’s story is about the monument of Battery B of the 1st New York Light Artillery, which is flanked by two 10-pounder Parrott rifles at the Gettysburg National Military Park.

At that place, TWO spooky apparitions were noticed and recorded running between the cannons.

This frightening footage was recorded by the visitors of the historic battleground, 46-year-old Greg Yuelling, and the members of his family on Sept. 2.

Like many other tourists, they went there to learn more about the history of the Civil War and to see the old battleground. While they were driving along one night, they started hearing noises, and then he and his uncle saw two shapes moving in the darkness, which were the size of humans.

The situation, according to Yuelling’s interview, was scary and it was crazy, so his uncle rolled up the window, but they succeed to record them. When they went back, they watched the video over and over again, and then they blew it up on the big screen to get a closer look, which made them even more freaked out.

This was really exciting for all Yuelling’s family, and he got a strange, ominous feeling like something was telling him to go back there, he was creeped out, so he didn’t go, explained he in the interview.

Although the sighting was captured on camera, some people aren’t convinced, and upon viewing it, the New Jersey Paranormal Research Organization posted to their Facebook page that the ‘ghost sighting’ wasn’t actually a ghost at all. Their theory is that these shapes are, actually water droplets on the camera.

According to the organization, the reason why most people are seeing a “ghost” is that they already know about the history of Gettysburg, and, automatically their brains will try to make something familiar out of a visual anomaly.

However, for Yuelling, who has heard about the possibilities to catch videos of ghosts around there, he was convinced that ghosts exist.

Watch another video about the ghost:
www.the-sun.com