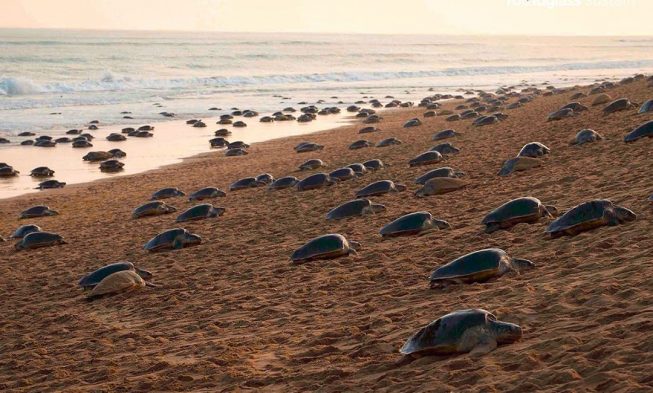 Human life has been completely different since the start of the coronavirus pandemic. After the World Health Organization declared a global pandemic, countries have slowly gone into complete lockdown.

Because of it, nature slowly started to take back its world from humans. Olive Ridley sea turtles came back to India in a surge.

The arribada or the mass nesting of olive Ridleys is nothing short of magic. Olive Ridleys live in oceans and only come to land to nest. When the females grow up, they return to the same beaches to lay eggs. How they navigate back was a mystery for a long time but recent science suggests that individual beaches have magnetic fields unique to them. When the turtles hatch, these fields are imprinted into their brains, allowing them to sense it when they need to return. It’s a magnificent internal compass as accurate as the latitudes and longitudes used by humans. Read a spectacular story by Swati Thiyagarajan @swatithiyagarajan on the nesting phenomenon on our website. Link in bio. . Photo: Kartik Shanker @shanker_kartik #arribada #odisha #oliveridley #oliveridleyturtle #nesting #rushikulya #turtle #India #wildlife #conservation #biodiversity #wildlifeIndia #turtles🐢 #massnesting #breed #naturalworld #rgsustain

It is amazing to see how the lockdown impacted the power dynamics between the human world and the natural world. The lockdown has also affected the pollution in many countries and results have shown that it’s decreasing rapidly.

However, after India declared a total lockdown due to the pandemic, more than thousands of sea turtles started to come and make a massive nesting season. This has been one of the most successful seasons for the species.

It has been reported that more than 250,000 mother turtles came to the beach and engaged in building nests in the past week alone.

ARRIBADA ~Spanish Word – means 'Arrival' 🐢
Refers to mass-nesting event when 1000s of Turtles come ashore at the same time to lay eggs on the same beach.
Interestingly, females return to the very same beach from where they first hatched, to lay their eggs.
🏖️ Olive Ridley Turtle pic.twitter.com/dvzslqA8zW

It this happened without the nationwide lockdown, things would have been ugly. The beach would be infested with tourists causing a terrible situation for turtles. Turtles dislike nesting with that many humans nearby.

The Forest department in India has been struggling to control the crowd. Additionally, crows and jackals have been attracted to the area causing a bad situation for the eggs since they like to feed on them. Another great problem for the sea turtles is poachers. Poachers tend to steal the eggs that they lay and sell them in local markets.

The Hindu reported that none of those disturbances have been going on since the lockdown. Since then, only 25 guards and forest researchers are allowed to go near the beach. The reason they are allowed to go there is to protect these endangered Olive Ridley sea turtles and their eggs.

Another mass nesting has been going on near Gahirmatha Beach which is also located in Odisha along the Bay of Bengal. An estimation of 60,000,000 eggs should be laid by these sea turtles this year.

Another problem for the Olive Ridley population is when the mother lays the eggs, most of them get destroyed due to her weight on them. This is how thousands of eggs are destroyed during nesting. Even though many of the eggs will be destroyed this way, it’s the natural way that has been happening during mass nesting. A mother turtle can lay about eighty to a hundred eggs and these eggs take 45 days until they hatch and the hatchling goes out to the sea.

Last year, the Olive Ridley sea turtles did not lay eggs at all. However, this mas nesting is amazing for their populations.

The biggest Olive Ridley number of turtles showed up at the beach this year. The Forest Department stated that there have been off years and this is just an alternate good year for the turtles. With a gradual increase of nesting in the past two years, an estimation for this year is about 4.75 lakh Olive Ridley sea turtles.