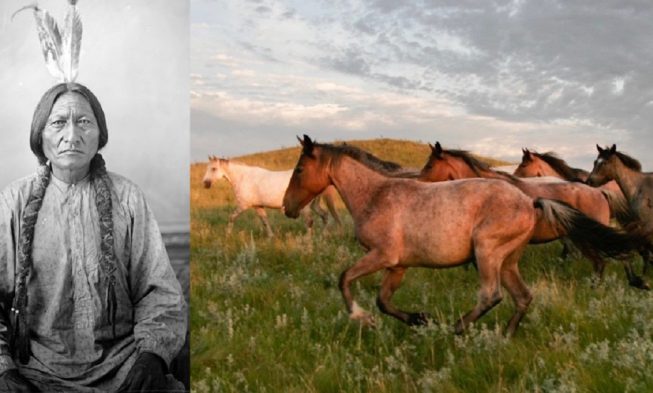 Brothers Frank and Leo Kuntz are known to have given up their careers so as to save Sitting Bull’s horses from extinction. Both of them are easy to tell apart. Frank has a walrus mustache and Leo wears suspenders.

They were brought up on their family’s ranch, which is located in North Dakota. At first, the Kuntzes brothers were just two ranch boys who were really into fast horses. But eventually, they managed to help the preservation of Nokota horses. (http://www.nokotahorse.org/leo-kuntz.html)

The story of the brothers

The brothers used to compete in the Great American horse racing, which is famous for its horsemen who were expected to ride pell-mell over a mile-and-a-half of broken country.

Throughout time, the sport got its nickname “suicide racing” due to the high risk of injury. Therefore, the racers needed a horse that was as rugged as the badlands themselves. And that’s what led the Kuntz brothers towards their quest for horses with good “bone”, which is a term they use for strength, stamina and smarts.

And on that quest, in 1978, they stumbled upon the wild “Nokota” horses or Theodore Roosevelt National Park. At the time, there were like 200 of these horses left on the planet. Since these horses are known for their amazing stamina, the brothers purchased a pair and started breeding them.

How did they come up with the idea

Then in 1986, when the brother heard that the park announced another roundup and auction, they decided to take a bank loan and use to money to buy 54 more of the horses, so as to sell them as race horses.

But while learning about their genetics, they found out that the horses were more special than they really thought.

There’s been a historical study by Harvard University and some DNA tests that showed that these horses are highly likely to be direct descendants of Sitting Bull’s personal herd of war horses that his people were made to surrender. And that’s why the Lakota  people have named the year 1976 as “The Year We Lost Our Horses”.

Anyways, after they won the Battle of Little Bighorn, the US Army slaughtered millions of buffalo and forced all the Native Americans to surrender their horses.

And when the brothers Kuntz saw that the National Park would not want the horses, just like the US Army did not care for them 100 years ago, they decided to do something about them.

So today, thanks to those two brothers there are almost 1000 Nokota horses in the world. As of 2006, about half of them lived on their ranch, which is now known as the Nokota Horse Conservancy.