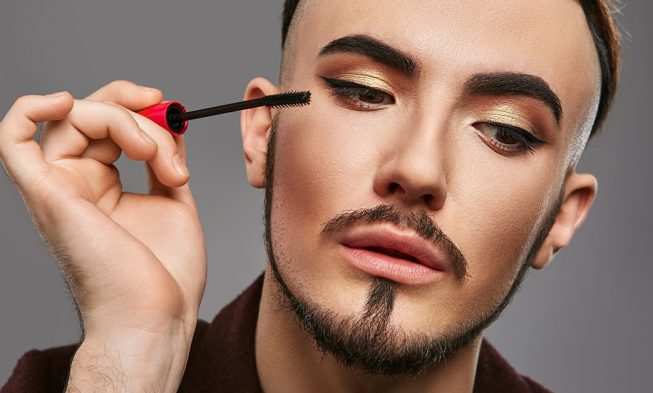 Men have worn almost as much makeup as females in eras and locations throughout history. Then, they stopped at some point, and for some reason.

Makeup has really only been a thing for women, actresses, TV celebrities, and pop or rock stars since then, particularly in the western world. However, the pattern has changed over the last couple of years.

Recently, you may have noticed that some of the most well-known makeup brands have come out with men’s makeup lines. Maybe you’ve also managed to see some new products explicitly targeted to men. The reason behind this is because males wear makeup, and in a largely untapped and growing market, businesses see the opportunity.

Where does makeup come from?

This is not the first time men have worn makeup, the thing is. The Egyptians of ancient times wore eyeliner. Both the British and the French put white powder on their faces in the 18th century, among other things. The contrast here is that both sexes had more or less the same makeup.

Until the 1920s, wearing makeup regularly for females did not become popular. There was a greater pressure that was being put on women to be found desirable as people started to migrate further into cities and dating shifted from home to out in the city. They were the ones with the cash, so they had to attract a man to take them if they wanted a nice night out or a dinner at a fancy restaurant. Women began wearing makeup in order for them to be more attractive and achieve this, and quickly makeup became a “women’s thing.”

Lisa Wade, a professor of sociology at Occidental College and the author of the Gender: Thoughts, Relationships, Organizations textbook, was interviewed during a discussion that was covering the topic of how this doesn’t make sense economically. Technically, they have double the earning capacity if a business were to sell to both men and women. However, in this case, “gender ideology” was more relevant than benefit.

Here’s how she’s explaining it: “Gender is all about preserving the idea that men and women are different,” she further states. “Anything we do that undermines differences is a real threat to the superiority of men.”

However, in today’s culture, the table seems to be spinning faster and faster, and more men are beginning to wear makeup.

There are several reasons why more men wear makeup. TV broadcasters and actors, for much of the same reasons as women, have been doing it for years:

Pop Culture Has Its Influence

‘Toxic masculinity’ has come under fire in recent years as being, of course, toxic. As the boundaries between what is “male” and what is “female” are being blurred, the ability to pursue things that have historically been seen as “for women” is gradually found by more men.

This involves fashion, general grooming, and makeup, of course. In this transition, Generation Z is at the forefront. They are more accessible than any other generation before them and are more gender-fluid.

The Pressure Is Increasing

A massive burden has fallen on women for decades to always look flawless and youthful. Flawless skin, beautiful hair, perfect body… everything. This strain has been rising for males over the last few years, which is why more men are reaching for makeup.

Some women do not like makeup, saying it sets unreasonable expectations on the standards of women’s appearance. It reiterates the notion that to be considered beautiful or attractive to society, women have to change their appearance, that they are not good enough just as they are. Instead, to be considered appropriate and worthy, they are unofficially required to pay hundreds if not thousands of dollars a year.