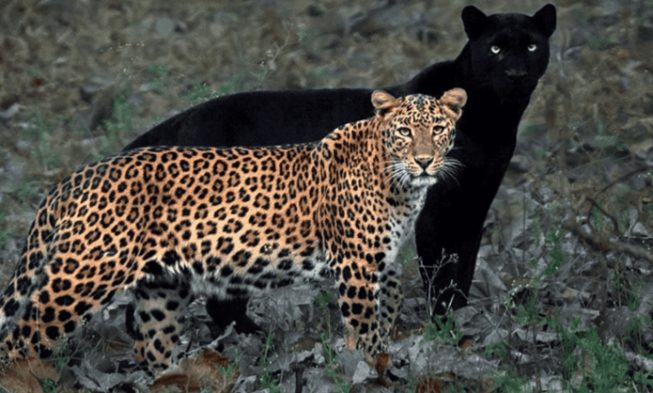 Mithun H is a wildlife photographer who took the chance to remind us of the miracles of our Mother Nature. Being occupied with work, running cars, skyscrapers and other huge buildings people seem to have forgotten about our Mother Nature and all the beauties that can be found there. This talented photographer was patient enough to wait for the perfect moment to capture a leopard and a black panther walking next to each other. This picture went viral on the Internet because it looks as if it’s a picture of a leopard and her no ordinary shadow. Take a look at the picture and you’ll see why it is known as such.

Mithun waited for six days so as to capture a leopard and a black panther standing right behind her. The wild cats are positioned in such a way that it looks like the black panther is the shadow of the leopard. Moreover, is creates a spectacular effect that both of the cats are standing still and calmly looking at the camera. Mithun H called this picture “The Eternal Couple”.

The photographer said that if he had to, he would’ve waited for a moment like that for 6 years. He was amazed by the shot he got. He explained that this photo cost him six days. His knowledge and years of experience in taking photos of while animals came out to be quite beneficial when it comes to this particular picture. Before he took the shot, he saw the wild cats making a large kill and he knew that they wouldn’t move until it was over. After that, he had to wait at one of black panther’s favorite paths since his knowledge taught him that that’s the place where he would take her because that was the edge of his territory. He said that he could still close his eyes and relive that moment over and over again. According to him, that’s once in a lifetime opportunity.

How did he become so passionate about taking pictures of wild animals?

Mithiun adds that what makes him so passionate about taking pictures of wild animals is the element of suspense and surprise. You could be waiting out there for your perfect shot, not knowing what you are going to encounter at the next bend. The waiting could take days, months and even years. But when the moment comes, those few seconds are magical. Apparently that’s something you’ll remember for the rest of your life.