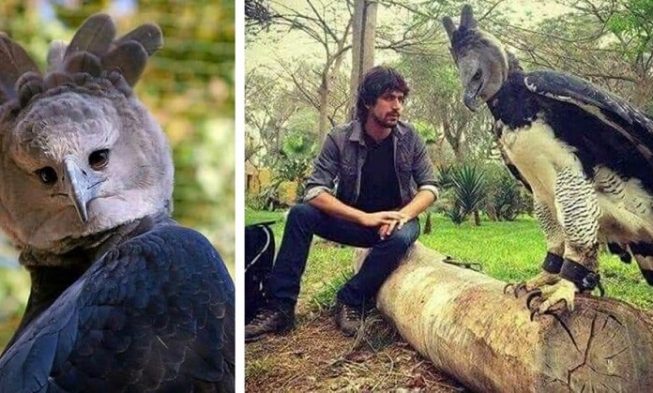 The harpy eagle is the largest and most powerful bird in the entire world. They prey on more than a 100 different species of birds.

Their habitat is located in the jungles of Mexico and can be found toward Northern Argentina. The tropical rainforest’s large trees are an ideal place for them to live and make its nest.

Usually, they construct their homes on the tallest trees in the jungle. The nest is constructed from branches, sticks, plants, and fur of animals that they’ve hunted. Additionally, they will continually add to the nest which will create an enormous dwelling which can fit a human being.

These eagles have 5-inch talons and when you compare it to the bear’s 3-inch claw, you’ll see just how big of a predator this bird is. They can exert more than 110 pounds of pressure with their legs and talons which can easily break any bone in the body. The eagle is the biggest predator in its habitat. Usually, they hunt tree-dwelling mammals such as monkeys, sloths, and squirrels, but they can also hunt for iguanas, snakes, and other birds.

The female harpy eagle can weigh up to 20 pounds which is twice the size of the male harpy. The female can snatch a 20-pound monkey off the ground and fly without even flinching. However, the males usually hunt smaller prey but more frequently than the female.

The harpy sits and waits patiently when it’s hunting. Sometimes they can be sitting on a perch for hours without making a move. They can see 220 yards far and when they attack their prey, they can chase them with speed up to 50 miles per hour.

The female and male harpy eagle usually mate for life with the female laying eggs every two to three years. The younglings cannot fly for about six months and even after learning to take care of itself, it will stay two more years with its parents to learn to be the biggest predator in the jungle.

Even though this bird’s population is not endangered as of now, their numbers are being reduced more and more because of human activity such as deforestation and poaching.