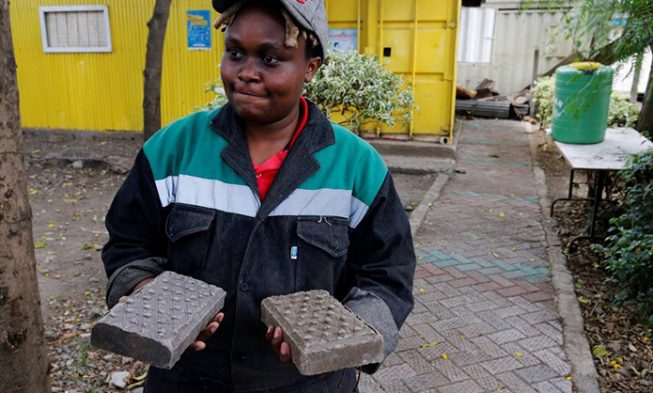 A 29-year-old entrepreneur from Kenya managed to create paving blocks and she claims they are cheaper, stronger, and more durable than concrete. She managed to build these merely from waste, plastic, and sand.

Stories like this renew my faith in humanity and the future of the planet. Plastic waste=resource. Bravo @nzambimatee_ke — you’re an inspiration! #innovation #plasticwaste #recycling #upcycle #zerowaste #reuse #sustainability https://t.co/NrNIUNJEIe

Nzambi Matee is a graduate of materials science and she has won a scholarship to research creative blending in the US. She decided that it was time to set up her slab-making workshop in the back garden of her mother in Nairobi. Amazingly enough, she claims to be able to produce 1,500 of these a day.

Nzambi Matee said that she was absolutely sick and tired of being on the sidelines. In Nairobi, the capital, civil servants fought against plastic waste.  So because there’s so much waste, with the materials, this engineer developed a commodity that is 5 to 7 times stronger than concrete.

ICYMI: Kenyan entrepreneur Nzambi Matee said she didn’t want to wait on the government to solve the problem of plastic waste, so she founded a factory to turn it into bricks https://t.co/sTHOMTUVCC pic.twitter.com/uQEhYfrJgg

She’s using the waste that they can no longer process; they can’t recycle. That’s what they’re including in their company.

While she pays for the plastic she gets from other recyclers, Matee gets the waste from packaging factories for free.

Per day, her factory produces quite a lot of bricks made from a mix of various kinds of plastic.

The plastic waste is mixed with sand. After that process it’s done, they heat it up and then compress it into bricks which, depending on thickness and color, are sold at different prices. To take the most common grey bricks, for example, the price for them is 850 Kenyan shillings or in dollars, that would be $7.70, and this is per square meter.

Matee set up her factory after waiting for the government to fix the plastic pollution issue after she ran out of patience.