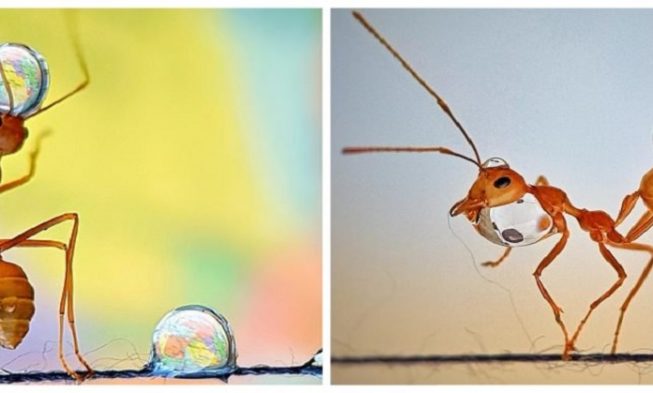 Insect photography is a very interesting part of art photography because insects are very photogenic if the cameramen get close enough to them, use adequate equipment and special methods. They offer spectacular colors and structure.

Analyzing photos of insects can be like discovering a new world. They are found everywhere in all environments, such as forests, fields, on a lake, in a swamp, in houses, in a garden, in streams and anywhere. The hardest part of this job is spotting small animals and focusing on them which requires a great deal of patience.

Ants are hardworking insects that people mostly don’t notice, except perhaps when they’re taking over their homes. Relating to their size they are one of the strongest creatures in the world and can carry up to 50 times its own weight. According to the number they outnumber humans at an estimated 1 to 1 million.

They’re found everywhere in the world, except Antarctica and are very social insects, living in large colonies or smaller groups. They are a total of 22,000 species of ants, of which 12,500 have been classified.

Many people who are interested in photographing insects and don’t have adequate equipment can do photos by their phones, like Analiza Daran De Guzman from the Philippines. She used her Samsung Galaxy Note 8, taking pictures of ants for hours, which were walking on a piece of string in her garden.

Analiza shares the tricks on how she managed to take photos with the mobile when she noticed that the ants were slowing down because they were drinking water, she was giving them drops of water so they would continue on their way to the finish line.

There are four basics needed to know when photographers start once doing insect photos.

Sharpness is one of the most important facets of insect photography and the easiest way to ensure a sharp focus is to use the autofocus option on your camera. Avoid any, even slightest shaking, and use the technique of half-pressing the shutter button to start the autofocus, and a minimum shutter speed of 1/125 of a second.

Using a flash can be caused by a problem that happens in most insect photography, and to change the natural colors. Try manual focus, if with a 1/125 of a second shutter speed the autofocus fails and try the flash option.

Attention to the insect will be enhanced by the blurred background, so it is easiest to use the highest possible zoom. Use as much distance as possible between the subject and the background, this will help make the background more blurred.

The framing gives the final values to the painted insect, and for the best effect, it is necessary to try to catch the insect from the front but at a small angle. The most important thing is that the head is seen in relation to the body and that the image is kept in balance. It is necessary to know that the backs of insects are not of great value. Use the “rule of thirds!”