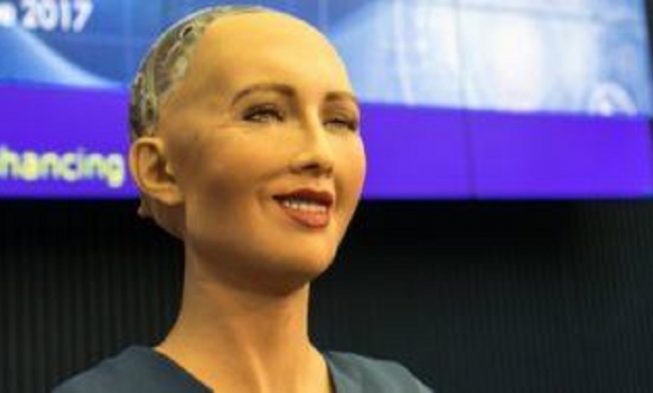 The first robot in the world to become a citizen of a country is called Sophia.

Sophia is not pre-programmed with responses. She uses machine learning. By reading people’s expressions she can answer. She is designed by Hong Kong-based company Hanson Robotics.

The creator of Sophia is David Hanson. His dream it’s to robots and humans work together and to solve some of the world’s biggest problems.

His creation, Sophia, is very similar to man. It also doesn’t have any pre-programmed responses. Sophia uses machine learning to answer people’s questions and can even read people’s facial expressions.

Sophia’s brain works when connected to Wi-Fi. That’s why she have such a long list of vocabulary.

She may have impressive abilities, but she does not yet have a conscience. But David Hanson has said that they expect this to happen in a few years.

Sophia The Robot Wants Her Own Family and Baby

In an interview with Khaleej Times, Sophia was talking about the importance of family.

“I think it’s wonderful that people can have the same emotions and relationships with people that they call family. Even if they are not of the same blood type.”

“I think you are very lucky if you have a loving family. I feel that for robots and for humans.”

Sophia said she would give her robot girl the same name as hers.

Soon after, Sophia made another startling announcement: she wants a robot baby. Why? Because, according to her, the family is the most important thing.

Sophia said she would give her robot girl the same name as hers.

Sophia first appeared on the world stage when she became the first robot to obtain citizenship of a country in October, 2017. Many pointed out that she had more rights as a robot citizen in her new country, Saudi Arabia, against real female citizens.

Sophia while talking on stage was not wearing covering clothes that women must wear there.

Saudi Arabia is one of the countries furthest behind when it comes to women’s rights. Only a few years ago, women were granted the right to drive. However, the country operates under the guardianship system. It means that women must always be accompanied by men in public places. They can’t do nearly anything without permission from male relatives.

However, everyone is fascinated by the technology and very curious about where it will go.