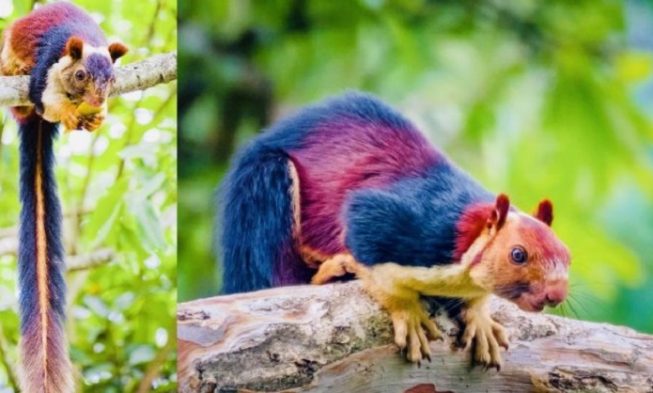 If by any chance you’re passing below peninsular India, a dense tree canopy, and happen to hear a scurrying above you, be sure to look up.

You might just catch a glimpse of a striking squirrel whose fur seems to have been hand-painted with brown, orange, maroon, and black splashes.

What’s the fuss all about?

On social media, amazing photographs of big, multi-colored squirrels taken in India are getting all the attention.

According to South West News Service, which is the very British news agency that was lucky enough to have the photographer who took the photographs – named Kaushik Vijayan, 39, snapped the widely circulated photos of the Malabar giant squirrels that are double the size of their less colorful relatives.

Meet the giant squirrel from Malabar

They have an all-natural technicolor coat. These vivid, bushy beauties, endemic to India, are also known among the locals as shekru. They extend as much as three feet long, much longer than the eastern gray squirrel and other more slender counterparts.

Why have these burly squirrels evolved to have such brightly colored fur is not well known. You might even think that it goes against the laws of nature as this color of the fur can be a detriment when it comes to hiding from predators.

The species is one of four relatively hefty rodents in the squirrel family, officially known as Ratufa indica, or the Malabar giant squirrel.

What else can it be?

Some claim that the color variance simply camouflages the animals below from predators since it appears to balance the tree canopy’s dark and light colors, which they spend almost their entire lives in.

Some claim it could help attract mates.

Just 20 years ago, those adorable squirrels were identified as an endangered species. They have since been excluded from that list, but deforestation and human growth still threaten their habitat.

Watch the video below to find out more about these adorable animals: